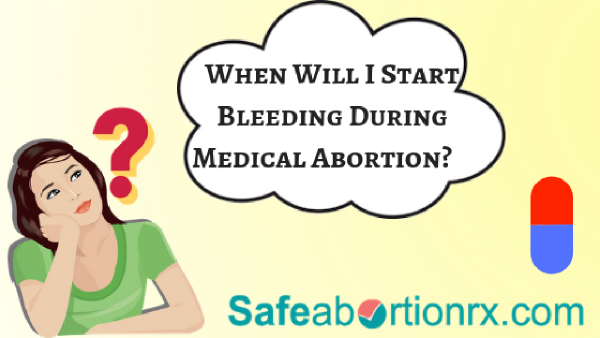 Bleeding is termed as the first sign in the abortion process. Consequently, it tells if the process has begun or not and indicates the action of two abortion pills in the regimen of the body. It is required to buy the pills of Mifepristone and Misoprostol online, and have an idea about the actions of abortion process.

Which abortion pill causes it?

Mifepristone and Misoprostol work closely to bring an abortion. The inner lining of uterus further supports a  pregnancy by thickening itself. The first drug ruptures the lining, and the implanted embryo is thus separated from the uterus. The embryo cannot develop further. Mifepristone further functions as an anti-progesterone pill. It acts by inhibiting the hormone of progesterone. Still, none of the actions would be capable of causing bleeding. Mifepristone also acts by preventing the working of glucocorticoids which nourishes the fetus. This further cannot lead to bleeding, although some women might experience spotting. Consequently, the drug can also initiate mild uterine contractions.

Bleeding is seen just after 1 to 4 hours of taking the second medicine of Misoprostol. The misoprostol pill is a prostaglandin, meaning it enhances the uterine contractility. As the uterus is primed by Mifepristone, it goes on with many contractions. Consequently, the result is of severe cramps. Misoprostol further softens the cervix and the contractions work together to push the pregnancy contents outside the body. Furthermore, a ripened cervix eases the process and the contents are flushed out by bleeding.

How long do you bleed after an abortion?

Every woman responds differently to the pills. At an average, certain women bleed for about 3 weeks after taking the second pill of Misoprostol. At times even some women have slight bleeding after intense bleeding is paused. Although this shouldn’t be confused with the regular menstrual period one goes through. The periods begin only after 4 to 6 weeks of an abortion and the blood discharged can last longer than the range of normal discharge.

When will it be the most severe?

When Misopritol goes to the system, the cramps and bleeding are severe, Usually, this is about 2 to 5 hours of the administration of the pill. Furthermore, some intense bleeding often lasts for up to 24 to 48 hours of ingestion. This indicates that the contents of pregnancy is completely flushed and is not a sign of distress.

What should I observe?

The uterine contractions often help in controlling the blood flow. So the blood vessels are compressed when the uterus contracts. Consequently, this doesn’t allow them to bleed any freely. At times when the uterine contractility is not sufficient, there is heavy bleeding. Foul odour At times, abnormally colored discharges send foul odour, which is recognized as a typical sign of infection. The shades of these discharges are often green or even yellow.

How to stop bleeding after abortion pill?

The two drugs induce the bleeding, is usually controlled through the napkins and pads. One can expect heavy bleeding, which is a sign that the pills have worked and the pregnancy remains are getting flushed out. One can buy abortion pills online, and follow the steps provided. When expecting, it is required to fully go through the issues, and understand the regimen to buy Mifeprex