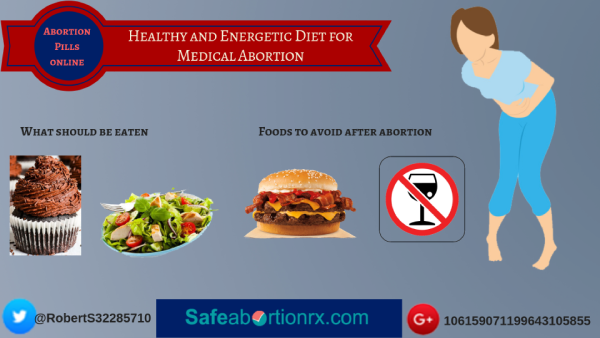 Medical abortion halts the regular processes of several human mechanisms. Consequently, diet during medical abortion plays a major role in the process and hence is an important tool in giving the body adequate nutrition after a medical abortion is done. Women who buy abortion pill kit online often do not have adequate knowledge except using the pills. Below is an overview of diet to be followed during a medical abortion. It is advisable to have small meals prior to having abortion pills. Liquids, specifically water and milk are essential in providing the body with adequate support to tackle the changes. During the whole process, the body might find difficult to adapt to a change in food, so do not break food quite often. Give the body time to adopt a different food for at least 20 days or more.

The main idea of diet during a medical abortion is not to pump up the stomach with heavy food and junk. The medical administrative can fairly give an idea to various health issues that are underlying and hence can clear the doubts of what not to eat.

Foods to avoid after abortion

Alcohol and junks are two main foods that need to be completely avoided. Alcohol diminishes the digestion of body in normal conditions, hence it greatly affects metabolism during pregnancy. Consequently, the body reacts in a different way when Alcohol is consumed.
Junks are often highly processed foods, with a large glycemic score. The body needs food that is high on fiber and nutrients. Junks mostly give out empty calories and hence would largely be detrimental.

What should be eaten?

Bleeding often terms much more than normal periods, so one may feel very lethargic and fatigue. Foods which can increase blood flow can be an issue. Therefore, skipping such foods which can maximize cramps or flow is advisable. Ectopic pregnancy often accounts for no bleeding even after consuming drugs of abortion. In such cases, it is highly recommended to check with a doctor.
Coffee and chocolate boost up the mood. Hence, it is greatly advised to have some of these during the medical abortion process.

Can you work out after an abortion?

It is advisable to resume/indulge with a workout after 4 weeks of abortion. Usually, the body is in a state to recover from damages of abortion, resuming workout immediately will only put into more stress. Ordinarily, monitoring the diet at first and slowly hitting resistance training proves beneficial in long-term. Initially, light resistance exercises followed by endurance activities helps in proper blood blow to the body. This, in turn, helps in giving the body the perfect balance to recover and minimize the excessive bleeding.

After abortion care tips are numerous, it takes a lot of efforts to make these tips accounted. Ordinarily, in terms of diet, snacking and relaxing is useful, unless it becomes binge eating. Mifepristone abortion pill online and Misoprostol safe abortion pills are often taken by women who want safe abortion process. These pills are always available from online pharmacy sites and are backed by reviews.